5-year-old Nivetha is fighting to stay alive after a Pneumonia attack | Milaap
This is a supporting campaign. Contributions made to this campaign will go towards the main campaign.
This campaign has stopped and can no longer accept donations.
Milaap will not charge any fee on your donation to this campaign. 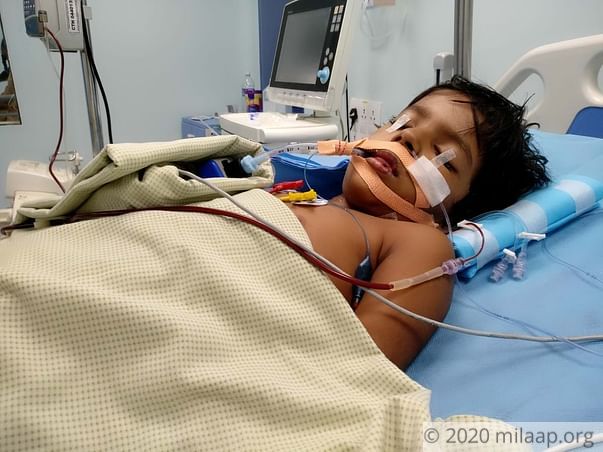 Whenever Nivetha went out to play, her parents Madhusuthanan and Nithya would tell her only one thing, make sure you don’t get injured. It is not because they are overprotective. It is because Nivetha was born with a condition where her blood does not have enough white blood cells; her wounds take a long time to heal and any infections can turn deadly. She may be only 5-years-old, but she has faced a lot of life-threatening conditions because of this condition. Now, she is in the ICU, fighting to stay alive after being hit by a bout of severe pneumonia.


Nivedha needs prolonged care in the ICU to survive

“She had a slight fever last Friday. Later that night, she started screaming, ‘Amma, I cannot breathe, I cannot breathe. Please help me.’ We rushed her to the hospital and we were given some medicines. But it kept getting worse and she looked like she was getting weaker. We had to admit her immediately,” says Madhusuthanan, her father.

Nivetha's parents are worried sick about her

Medicines do not work effectively in this child’s case

Nivetha’s complete lack of white blood cells not only make her more susceptible to infections, but unresponsive to a range of medicines as well. “Whenever she gets a small fever or cold, we are scared that it might turn into something much bigger because usual medicines cannot control it. She loves playing with water, but we don’t allow her to. She already had pneumonia once and I remember how much my baby suffered. Nothing could help her, not even medicines,” laments Nithya, her mother.

Right now, Nithya is on ventilator support in the ICU as she cannot breathe on her own. There are tubes running through every inch of her body. Her eyes are taped shut, in order to prevent her from staring unconsciously at the lights overhead as it may cause eye damage.

Despite her illnesses, she is an active, loving child

Since birth, Nivetha had to fight one form of prolonged illness or the other, but that did not stop her from being one of the smartest kids in her school. “She was reciting nursery rhymes in her semi-conscious state in the hospital bed. That is how much she likes to study. But we have no idea when she will be able to go back to school,” says Madhusuthanan.

But what he loves most about his daughter is how empathetic she is. “Whenever she saw sick people on TV, she would ask me to help them. Tears would well up in her eyes if they narrated their sad stories. My baby never knew that she was facing the same prospects,” he shares. Similarly, when she saw people fighting on the streets (which is common in the area in Chennai where they stay), she told her father, “Appa, make them stop. Why are they fighting when they can talk and solve things?.”

Every day with their daughter was a blessing for these parents

Both Madhusuthanan and Nithya did everything to give Nivetha as normal a life as possible, despite knowing that a small infection is enough to kill her. She is the apple of their eye. Whenever she got sick, their worlds turned upside down.


Nivetha with her little brother

“Even if it was only a small cut on her finger, we would run to the hospital. We didn’t want to lose our daughter at any cost,” says Nithya. Nivetha loved her mother more than anything in the world. “A few months back, Nithya had to undergo a surgery for an abnormal growth behind her ear. Post operation, she was in a lot of pain, but she told me that if I am there, nothing is going to hurt,” says Nithya, with tears in her eyes.

On the day her pneumonia got worse, Nithya had fought with her brother. In the ICU, that is what she kept telling her mother before she was put to sleep by the strong medicines that are helping her survive now.


“She told me that it is because her thambi hit her that she got really sick and couldn’t breathe. But she also missed him and wanted him to visit her. I told her he will come soon to see her,” says Nithya, adding, “Her brother is with his grandmother. He doesn’t know that his sister is so unwell. He’s just a child, but when we think about what to tell him if something bad ever happens, it really kills us from inside.”

Madhusuthanan has already spent Rs 10 lakh on his child’s treatment since her birth. He works as a cook in a catering company and does not have any savings, and therefore cannot afford the medical expenses. For Nivetha to win her battle with pneumonia, he needs to spend another 5 lakh to keep her in the ICU till she recovers. After this, Nivetha might also require a bone marrow transplant in the future. Your contribution can mean a lot to this family. 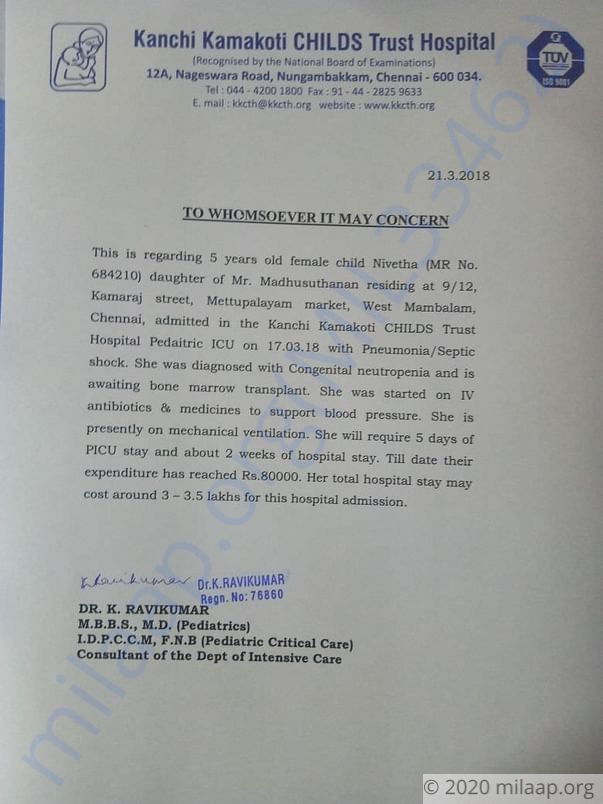 Thank you for the wonderful support that you have shown towards Nivetha. She is doing better now compared to earlier. She has successfully undergone the bone marrow transplant procedure on Friday (30th March). Her health stabilised and based on her health she was discharged from the hospital.

She has been advised regular follow-ups. Based on her health and recovery, the doctors will be able to suggest the future course of action. Thank you all once again for the wonderful support. Please do pray for her health and speedy recovery. Will keep you posted. 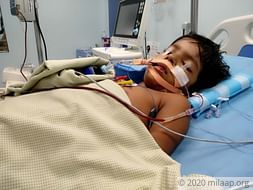