Help This 10-month-old Who Battles For Life Second Time In 3 Months | Milaap
This is a supporting campaign. Contributions made to this campaign will go towards the main campaign. 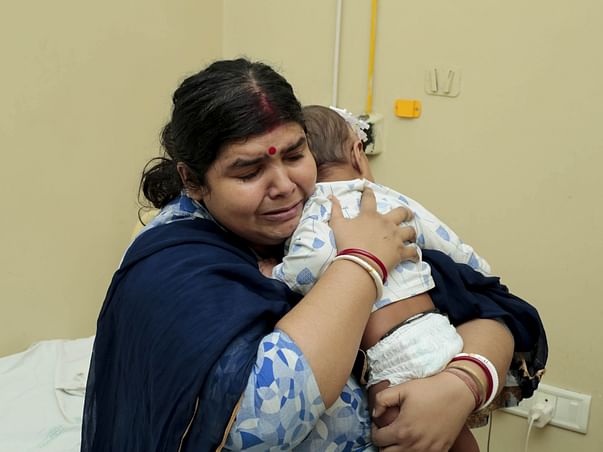 “His body was producing at least a few platelets before. After the transplant failed, even that stopped. He is surviving on transfusions every second or third day. If he does not get the second transplant soon, he will not live to see his first birthday.” - Anjali

After months of fighting aplastic anemia, baby Nischal got a bone marrow transplant on 24th December 2018. As they waited for him to recover, he got critical. The family discovered that the procedure failed, and they have no other option but to try again. Nischal should be admitted again on 21st February to start the procedure. Unfortunately, this family has exhausted all their funding options and cannot afford to save him.

10-month-old Nischal has always been weak, exhausted and in pain

Originally from Indore, Anjali and Nishit moved to Gurgaon for Nischal’s treatment in December. He was diagnosed with this blood disease where his body does not produce enough blood cells. He began having blood transfusions right from when he was 3 months old. Soon, it became impossible to find a vein in his arms or legs, and they had to insert a port on his head. In October, the family began gathering funds for the only treatment that could save him – a bone marrow transplant.

“It took us a few months to prepare for the expenses. In December, he went through chemotherapy. It was tough. He needed to be in a sterile bubble. He could not go out or even smell fresh air because he would get infections. He already had a high-grade fever. If he contracted any infection, it would have been hard to save him. We went ahead with the transplant on Christmas Eve. I never anticipated what happened next.” – Anjali

Nischal's condition has been critical since the transplant failed

When they were waiting for the transplant to take effect, Nischal had a high fever. His temperature would not go below 105 F. Initially the family was told that it could be the effect of chemotherapy. When he got critical within 3 weeks, he was tested. It was confirmed that his body had less than 10% of donor cells.

“At that point any infection would have been fatal since his immune system was totally weak. We had to stay in the hospital until his fever went down. On Jan 29th, we were discharged. Yes, we should have stayed in the hospital, but the bills were amounting to Rs 40,000 a day. I did not know when we could get the money ready for his next transplant, so we decided to go home.” - Nishit

'Every visit for transfusion is costing us Rs. 23000, and we are nowhere close to saving him'

Since then, the situation spiralled. Nischal needs blood transfusions every 3 days. Sometimes, he becomes pale, irritable and begins to cry uncontrollably just a day after the transfusion. He needs tests four times a week to check the platelet levels. He is also on heavy antibiotics to prevent infections. This temporary treatment could itself be fatal if they do not act fast.

“The first time, we got stem cells from the registry. Totally we spent 21 Lakhs including the crowdfunded money, loans and savings. This time, again we have to go to the registry since nobody in the family is a match. This time, the stakes are higher. So, it is also more expensive. We have applied for government funds but fear he does not have enough time. Every third day we are spending Rs. 23,000 for transfusions and medicines. It is impossible for us to arrange lakhs again.” – Nishit

They are now dependent on everyone for food, shelter, and cure

Nishit had to take leave to join his wife and son in Gurgaon. This means the family has no income, and their savings are all gone. Their relatives take care of food and living expenses, but it has been hard to source money for the next transplant.

“We have to admit him day after tomorrow. I don’t know how long he can go on like this. The iron buildup is already affecting him. Blood bags are no longer the solution, nor can we keep our son in a bubble. He has made it this far, with your help he can survive.” - Anjali

Nischal has probably not known even a day without pain. His development has been highly affected because of the disease. His life is at stake yet again, and your contribution could gift him that healthy life every child deserves.

In less than 48 hours, Nischal’s transplant procedure will start, provided the family gets your help.

UPI: rzpy.givetomlpnishchal012@hdfcbank (Copy to clipboard)
Or
Click here to read the instructions before you make a bank transfer. 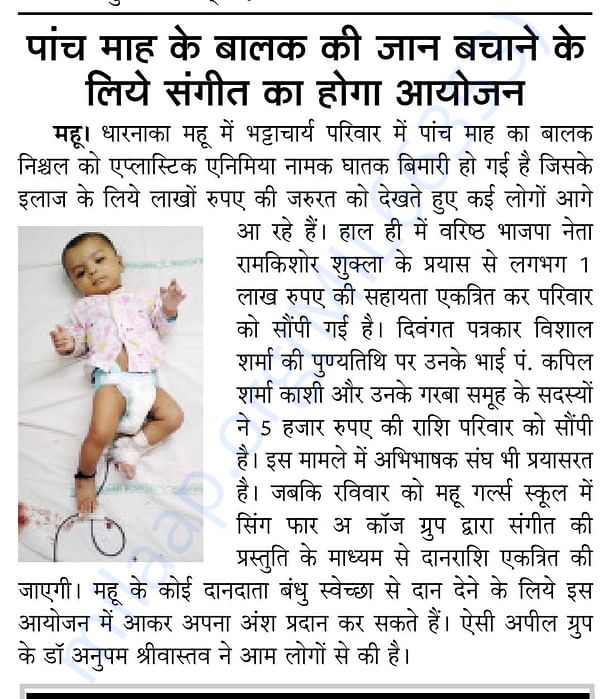 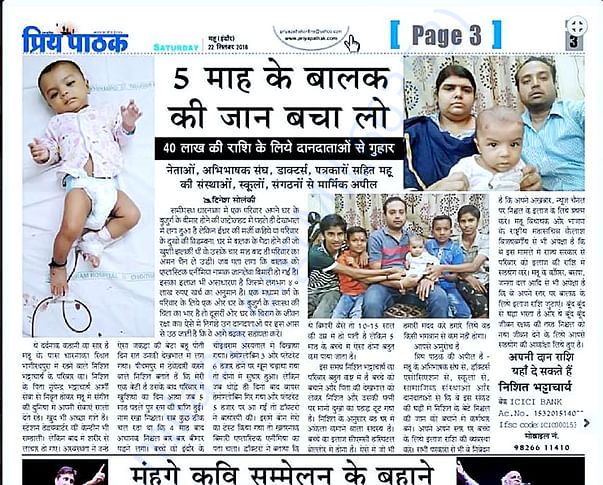 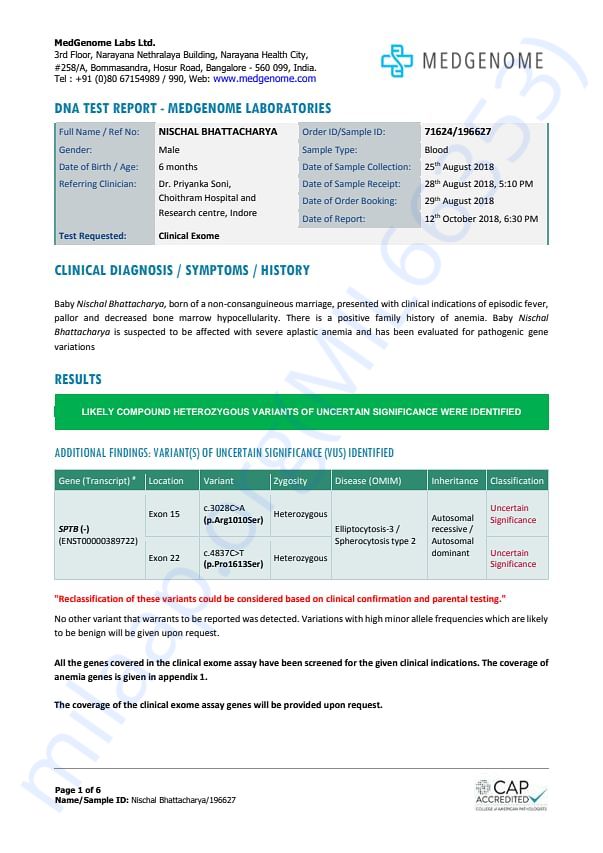 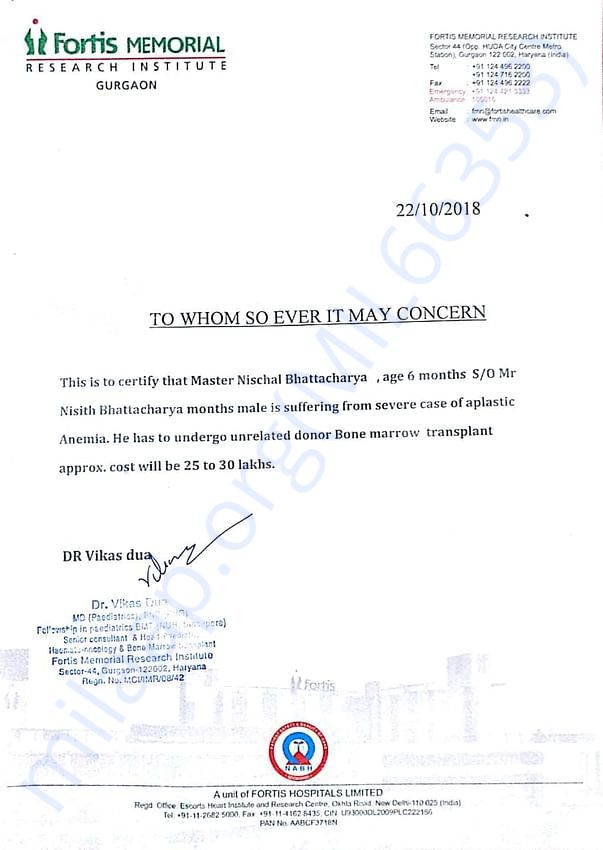 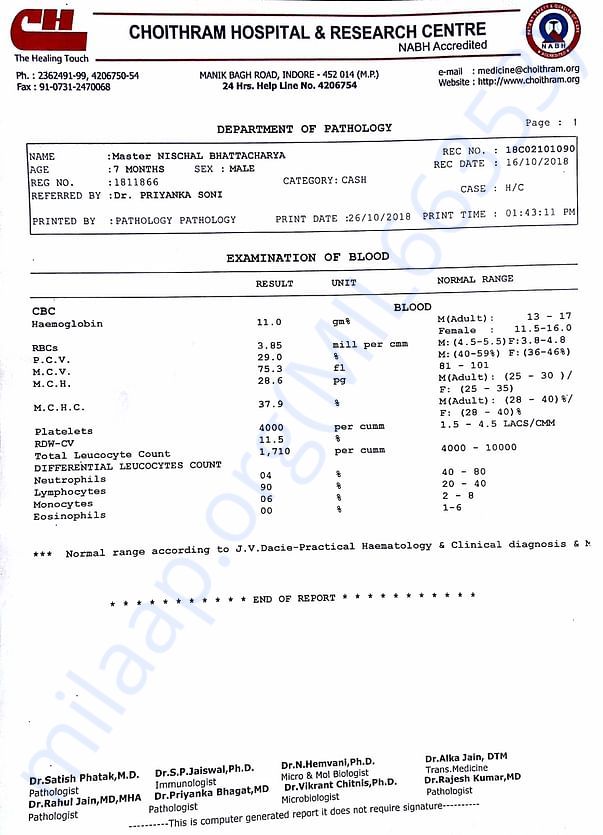 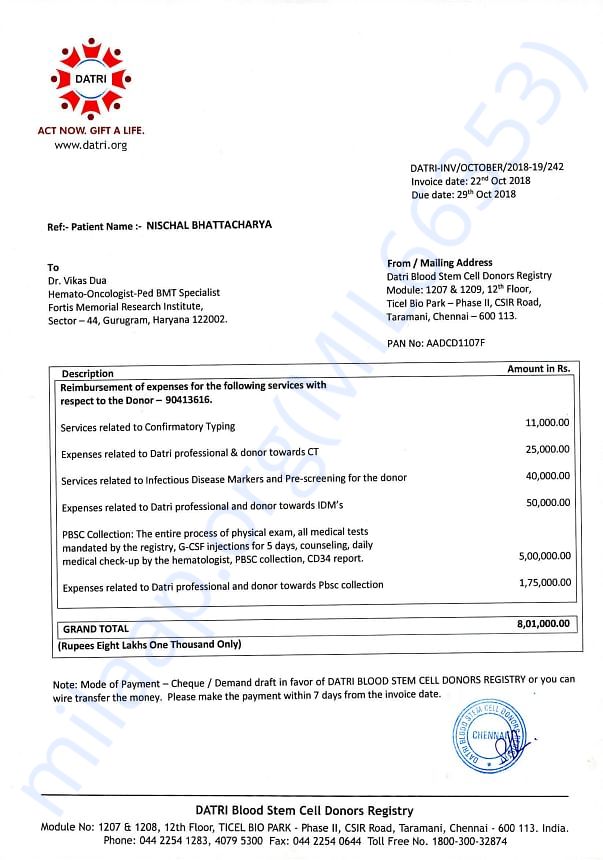 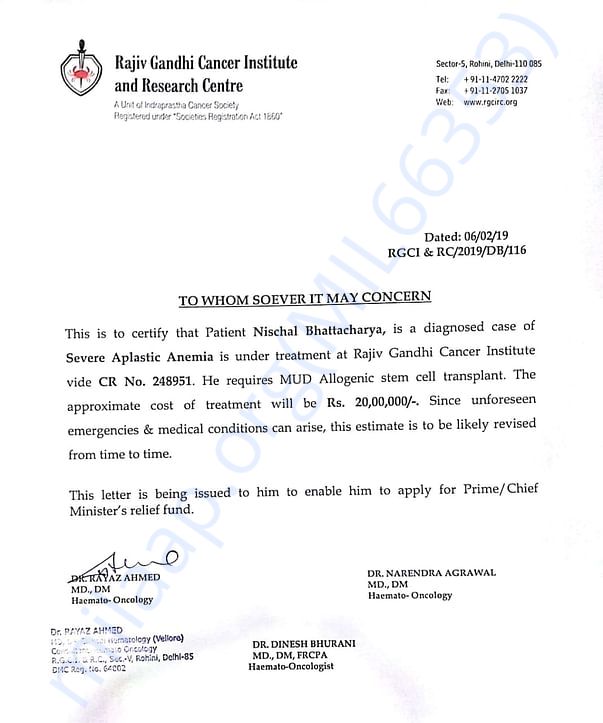 UPI: rzpy.givetomlpnishchal012@hdfcbank (Copy to clipboard)
Or
Click here to read the instructions before you make a bank transfer.

Thank you very much for your love and affection for nischal.
Nischal is doing well now .he goes every week for routine check up and blood test. His journey pathway is too long therefore
My humble request to you all please keep Nishchal in your prayers and thoughts.

Happy Diwali to you all

Thank you very much for your love, affection and blessings for nischal.

He is doing well now .his counts are good and he is without any transfusion. He is on only oral medication. His doctor gave permission to us  for go back to hometown Indore his next oppointment  for meet his bmt doctor is after one month. We reached Indore and his grandfather and grandmother is so happy to see him healthy.
Dear donors This was been only possibled for your support and blessings.we are heartly thankful to you.
Nischal's current treatment is starting  in choithraam hospital Indore.

His fight is still  on way

Thank you all
Anjali
Dear Donors,

Thank you very much for your blessings and love for my son Nishchal.

Nischal's blood count is now increasing. Doctors discharged him last Saturday and give instructions to stay near the hospital for the next three months of further treatment. Nischal's treatment will continue for one year.

Once again heartily thanks to all donors who supported us. My humble request to you all please keep Nishchal in your prayers and please share the campaign we need more funds to pay the hospital bill.
Load more
Donate 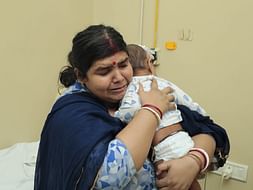