Mother Of 3 Is Completely Paralyzed Due To Rare Disease, Needs Help | Milaap
This is a supporting campaign. Contributions made to this campaign will go towards the main campaign.
This campaign has stopped and can no longer accept donations.
Milaap will not charge any fee on your donation to this campaign. 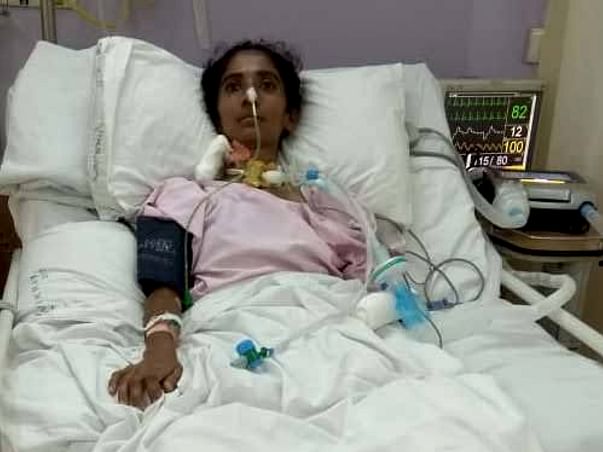 Nigar is someone you can rely on. She's kindhearted and loving, and has helped so many people along the way. Whether it’s her own family or an elder in the neighbourhood, Nigar is always there to lend a helping hand. A mother of three young children, Nigar took free tuitions for over 40 underprivileged children in her home in Channapatna, before a dangerous disease took over her life. In just two days, the active and cheerful 35-year-old was paralyzed. She couldn’t move or even swallow her own saliva. As her terrified children watched her being taken to Bangalore for treatment, they asked their father “When will mumma come back?”

It’s been nearly three months since that fateful day in November, and Nigar continues to fight for her life.


Nigar with her children - Ariyan and Ayan

In 48 hours, she was completely paralyzed

Nigar has Guillain-Barre Syndrome, a rare and dangerous disorder in which the body’s immune system attacks the nerves. This spreads quickly and paralyses the whole body. Nigar’s husband, Asghar, now shuttles between Bangalore and Channapatna, taking care of the children, the small farm that they own and visiting his wife. Nigar’s younger sister, Rahat, and her mother, Gulnaaz, stay with her in the hospital.


“She started having pain in her legs on 10th November, but didn’t think much of it. Two days later, suddenly, she couldn’t move her legs at all. It was on Monday morning when her children were getting ready to go to school, that her condition deteriorated, and her entire body got paralyzed. She was then rushed to Bangalore by her husband.” – Rahat, Nigar’s sister

With medication and physiotherapy, Nigar’s condition is slowly improving. She has now slowly started moving her fingers and her neck, but she still has a long way to recover completely.


Nigar's sister, Rahat, and their mother in the hospital ward

Her children miss her every day, they're waiting for her to come home

Rehaan (12), Ariyan (10) and Ayan (7) are everything to Nigar. Even now in the hospital, her eyes light up every time she hears their voice or sees their picture.

“Her children miss her terribly. They come to visit her over the weekends, and video call her over the weekdays. She can’t talk or move, but she sees them and hears them. They know something is wrong and their mumma is hurt, but they’re too young to understand why this is happening. They tell her to come back home soon. I know she’s fighting with all her might to go back to them.” – Rahat

Nigar and her husband Asghar with their youngest child

Nigar needs continued treated and physiotherapy to survive this dangerous disease. Her husband owns a small piece of land and earns just enough to take care of his family. Her sister works in a private company and has helped as much as she can so far. Her parents have also exhausted all their savings on her treatment. Together, they have spent 20 lakhs so far and were able to get her treated, but now this family needs your help to save the kindhearted Nigar. She can go back to her children with your support. 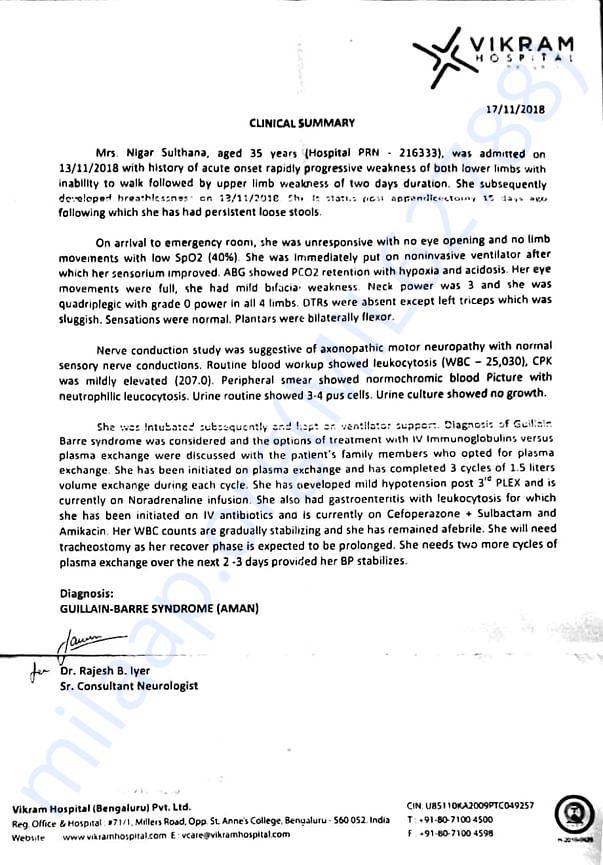 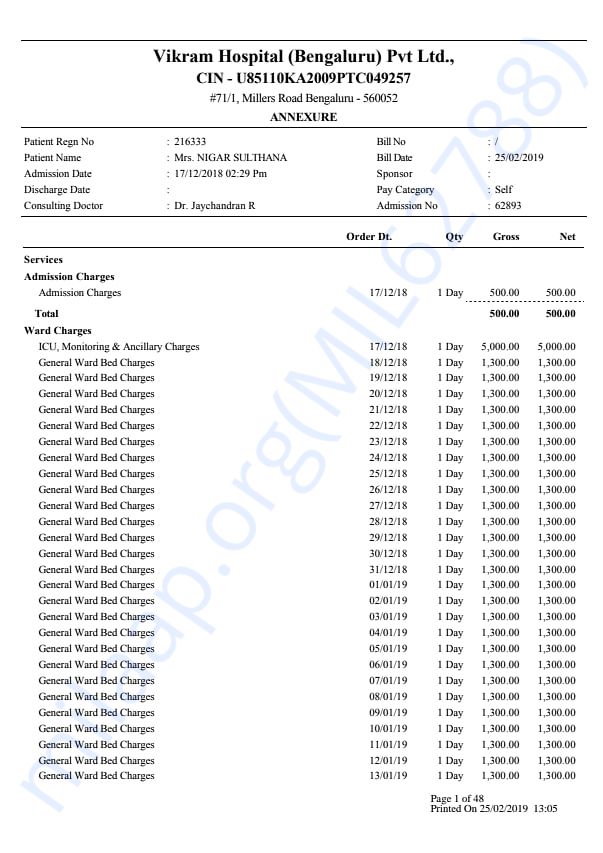 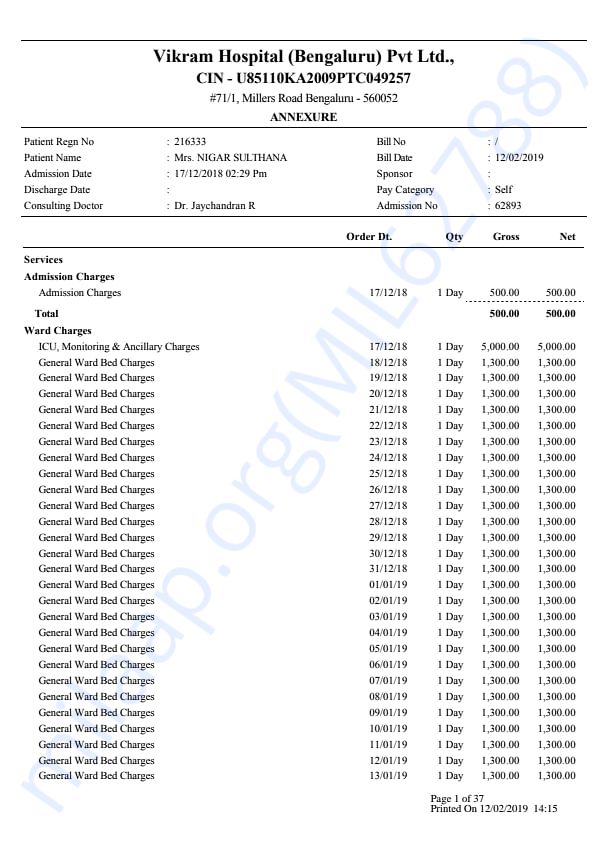 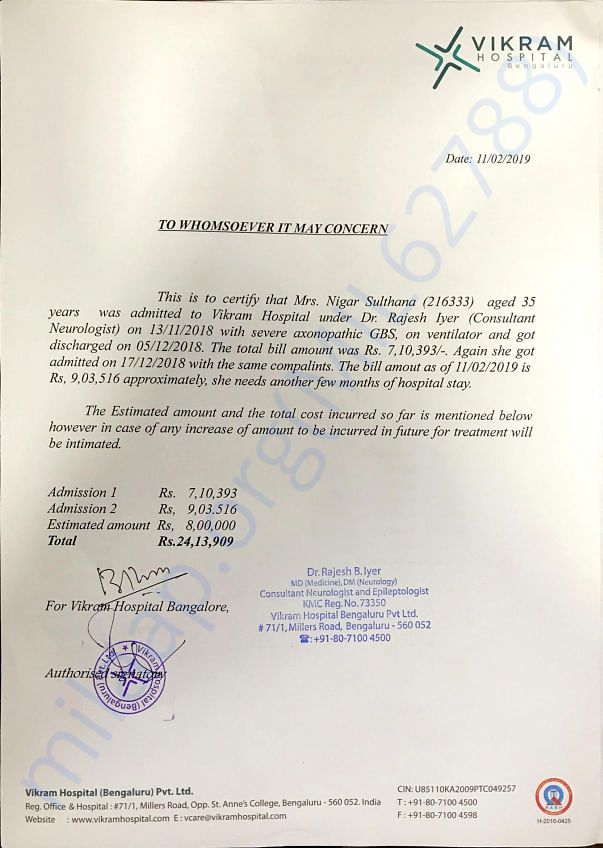 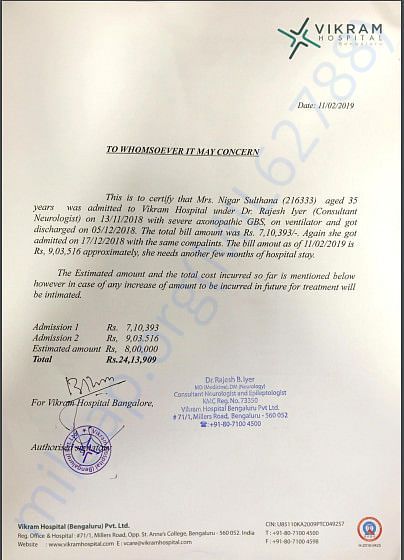 Here is a quick update on Nigar Sulathana's health.

She was off the ventilator support in the first week of July 2019 and is showing signs of improvement. Her diaphragm movement has improved and she is also able to move her hand. She is able to swallow food and is also able to sit on the wheelchair, with help.

However, she still does not have movement in her lower body but is showing signs of improvements.

We again thank you for your support and blessings

Thank you all for supporting Nigar.

She is coming to the hospital for regular follow ups.

Hereby, we are attaching an update letter from the hospital.

Please share this campaign with your friends and family and keep supporting her. 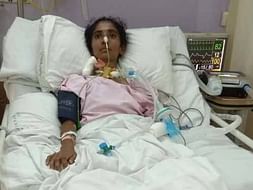