A Cancerous Tumor Blocks This 2-year-old Girl's Urinary Tract | Milaap
This is a supporting campaign. Contributions made to this campaign will go towards the main campaign.
This campaign has stopped and can no longer accept donations.
Milaap will not charge any fee on your donation to this campaign. 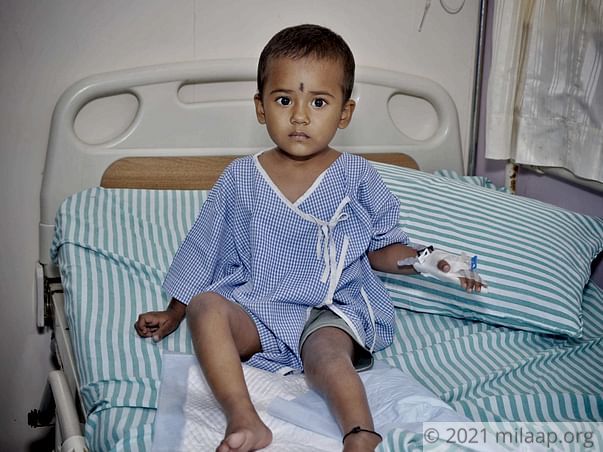 2-year-old Madhushree, screams every time she has to go to the bathroom. She is scared. It is not the fear of a monster in there, but the unbearable pain that strikes her when she tries to urinate. "Amma! Doctor beku!" she cries asking her parents to take her to the doctor. Unable to pee or poop without feeling like she would explode from within, this little girl is now fighting cancer.

Madhulingayya and Yashoda rushed Madhushree to a local doctor in August 2018 last year. That was the first time their daughter experienced pain in the bathroom. Diagnosing her with a urinary tract infection, the doctor prescribed a few medicines. Madhushree recovered the same day, or so they thought.

"Our New Year began with her crying for me from her bed. She asked me to take her to the hospital right then for the pain. She kept saying 'I'm not able to Amma! I'm not able to sussu! But I have to.'  After a scan at the hospital, we found out that she has a tumor that is pressing against her urinary tract. It has been growing since last year and we never knew." - Yashoda.

The tumor is cancerous. While it could spread and kill her, being unable to relieve herself in time can flood her body with toxins and kill her faster. She needs a catheter to empty her bladder. As for pooing, she has to clench her teeth to keep herself from screaming as she squats over the toilet. The obvious treatment is surgery to remove the tumor, but first Madhushree needs chemotherapy to restrict the growth of the cancerous cells, and reduce the size of the tumor.

"We could pay for one chemotherapy cycle. We ran out of money for the next session. If I cannot pay, then it will just get bigger and take my daughter even before she can have the surgery."  - Yashoda

Her treatment is stalling due to lack of funds

Even as she is clutching her stomach and writhing around in pain, Madhushree comforts her parents who break down in front of her. "Don't worry. Doctor uncle will make this go away and we can go home," she says, unaware that her father may be forced to take her home anyway because he has no more money.

"I could arrange Rs. 1.5 lakhs. I had to stop working since she has been admitted in the hospital. My friends helped me. Everyone has done what they can. Now, I am stuck with only one option - Beg strangers for help. The other option is to take my daughter home. I cannot watch her die." - Madhulingayya.

'We have lost a child once, we cannot lose another'

Madhushree is now on a liquid diet. She often vomits because of the effects of chemotherapy. Yashoda is surprised at Madhushree's positivity. The pain has not been able to break her will. The couple lost their first baby just a day after birth in 2013. They will not survive the loss of another child.

They are losing time in arranging money for further treatment

"We need Rs. 8 lakhs to complete her treatment. She still has a few cycles of chemotherapy after which she needs a surgery. I am looking for funding from the government and other organizations but I am losing so much time. Please, help us save our baby girl." - Madhulingayya.

If you have ever had a urinary tract infection or kidney stones, you may understand Madhushree's suffering. She is just 2 years old, and she has a tumor that is just growing, stopping her from doing as much as relieving herself in peace. She is dying every single day, in the most horrible way. 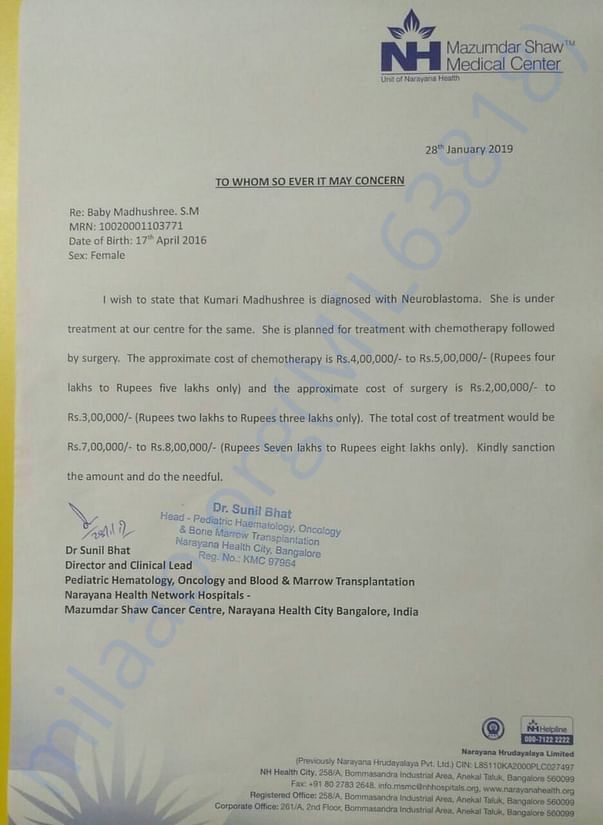 Madhusree underwent the surgery and she is now hospitalized due to some infection. Please keep her in your prayers.

Thank you all for your love and support shown on our cause.

Madhushree currently underwent 2 cycles of chemotherapy and there are 4 more cycles left as suggested by the doctor. The 3rd cycle will be done on 3rd of March. When the tumor size reduces, the doctors will go ahead with the further treatment.

Thank you all! Please pray for her health and speedy recover.

Scan & donate with any app
check_circle_outline Download payment receipt
Report fundraiser
Know someone in need of funds for a medical emergency? Refer to us
Rs.4,000 raised 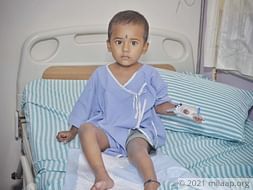